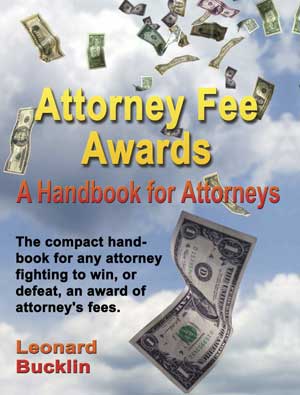 The following text excerpt from Attorney Fee Awards is a sample of the concise, frank, and practical legal fees claim advice you get in this handbook, designed solely for busy litigation lawyers who want a no-nonsense approach. It illustrates the law and advice that is packed, crisply and compactly into this handbook to help both the proponent and the opponent in attorney fee award disputes.

This text excerpt is protected by copyrights. It is presented here to help you decide on your purchase of a handbook on attorney's fees. The footnotes and footnote citations included in the book's text have been deleted from this view of sample pages.

Most cases are settled; not tried. If a statute or case law regarding your lawsuit provides for an award of attorney fees to the prevailing party, take special notice of that attorney's statute or case law regarding legal fees, during your negotiations for settlement. If you are not explicit during settlement, questions arise whether the settlement was intended to include attorney's fees, and whether attorney fees were waived.

In the settlement agreement make it clear whether:

Most commonly, when cases are resolved by a settlement agreement, the parties end the case by a stipulation of dismissal. In Kokkonen v. Guardian

There is a further potential problem for the party that believes they prevailed in obtaining the settlement, perhaps even a settlement providing 100% of everything sought in the pleading filed in the case. The problem can arise because ---

In the federal courts, Buckhannon v. West Virginia Department of Health and Human Resources,² mandated that unless a court has issued an order which creates a "material alteration of the legal relationship between the parties" or "a judicially sanctioned change in the legal relationship of the parties," then there is no "prevailing party" for an award of attorney fees. State decision law is tending to follow this pattern for the future. In short, if you represent the plaintiff, do not settle and dismiss the case, expecting an attorney fee to be awarded by the court because your settlement agreement paid the plaintiff money and everything else the plaintiff wanted.

On the other hand, if the settlement agreement is incorporated into the dismissal order, and the court retains jurisdiction to enforce the terms of the agreement in the order of dismissal, then the court's order of dismissal based on the settlement agreement becomes the legal equivalent of a consent decree on the merits. Note the two separate requirements: incorporation into the decree, and the court's retention of enforcement powers.

In a consent decree on the merits, a winning party can be a "prevailing party."³ A consent decree, in an appropriate case, may serve as the basis for an award of attorney's fees. If the consent decree does not include an admission of liability by the defendant, there needs to be some court-ordered change in the legal relationship between the parties.³ To define a plaintiff as a "prevailing party," defendants could agree to a declaration ordered by the court's consent decree that plaintiffs have certain rights or that defendant's procedures will be improved, or both. If there is neither a declaration of rights, nor an ordered change in what defendant will do in the future, nor an admission of liability, a court in an enforcement proceeding may decline to find the plaintiff was a "prevailing party" or award attorney fees.